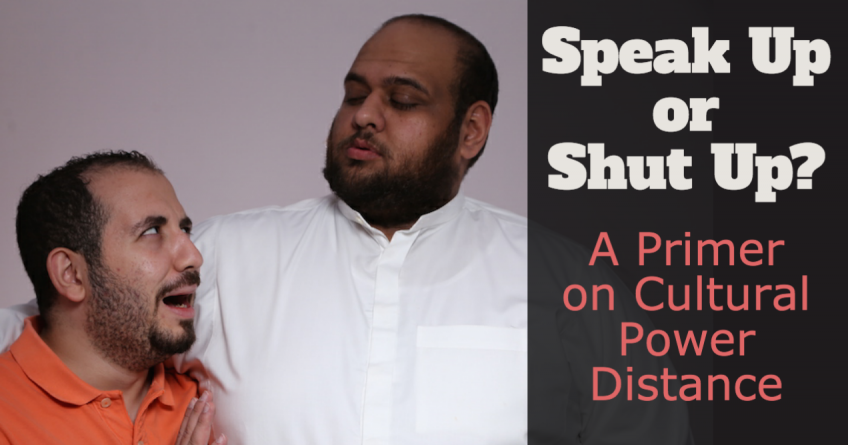 I had just moved from Saudi Arabia to the US to begin my college career.  While enjoying Saturday Night Live one evening, I watched in utter shock as an entire skit mocking US President Bush unfolded in front of me.

“How can this be shown on TV?”

“Speaking negatively about the President is so disrespectful!”

My mind was racing thinking of what kind of repercussions these actors would face.

If you mock the government or government leader in Saudi Arabia, it may not be accepted from society or the government. And as a naive youngster, I just figured that every country in the world had the same expectations.

I soon learned that no, these actors weren’t going to get into trouble.  In the US, the right of free speech ensures this.

While the underlying features of power distance have been around since caveman days, the concept of power distance was pioneered by a professor named Geert Hofstede in the 60s and 70s.  The premise is that power distance defines the degree to which subordinates are willing to respect the hierarchy.

In a high power distance society there is a large gap between those in power and those without. Leaders are questioned less and their actions or words don’t need to be justified.

To those of you who grew up in a low power distance society, this can seem overly authoritarian.  But if you are from a high power distance culture, you see it as quite the contrary.  Leaders are there to use their wisdom and experience to help guide their subordinates.

This high power distance can be seen in the workplace.  People in KSA are very sensitive to titles. If someone’s responsibilities stay the same, but they receive a title portraying more power, you can bet that they will receive more respect.

After getting my degree and returning to Saudi Arabia, I was in for a rude awakening at work. I was used to speaking my mind for the good of the company. Managers had a hard time with this if it made them look bad or affected their status. At one point it felt like everyone was against me because I stood up for my opinions.  I had to make the choice to adapt to the culture or speak up.  I spoke up.

Although titles and leadership positions are respected in countries with low power distance, ideas flow more freely between those with and without power.  It is normal (even encouraged) to express a difference of opinion with those in charge.

If you’re from a traditionally high power distance society, this mindset can seem strange as well.  It can seem like there’s too much freedom and like subordinates may get out of control.

The workplace in a high power distance country can be significantly different than a low power distance country.  Everyone may be expected to pipe up during meetings.  Information is easily passed up and down the hierarchy, like if you need detailed information to work on a project.  Higher ups are more willing to take blame.  There are recent trends in company culture like holocracy and unlimited vacation days that would never be accepted in high power settings.

So for the first two years, I kept my mouth shut and found other ways to get my questions answered, like approaching friends. I watched as American students eagerly raised their hands and interrupted the professor’s time to clarify a point.

But the professors never seemed to mind. To them, it meant students were paying attention and putting in the effort to understand the material.  I decided I should be more open and try to engage in dialogue like the rest.

I started out slowly. I began going to see the professor during office hours to get my questions answered. I went to tutoring sessions and got lots of practice speaking up.  Finally, I had the confidence to address the teacher. At first, I would blush and forget how to say things in English.  But by my junior year, I had adapted to the culture and was able to have a dialogue with the professor in class.

As someone who has spent a significant amount of time trying to first adapt to low power distance, and then re-adapt to high power distance, I’m very conscious of the way I run my company. I have struggled with the best way to lead my team.

To begin with, my employees call me “Mr. Motaz” which was so strange to me after returning from the US.  I HATE it, but it’s done out of respect.  I’m the leader, and they’re just going by the cultural norms.

Despite this, I tried to portray a company culture of low power distance but found that things got out of control quickly. I was placing too much trust in people, and they began to abuse that trust.  Tasks didn’t get done, and our results suffered. I quickly realized that my leadership style had to change based on what my employees were used to.

Now I try to walk a fine line between low and high power distance  It’s a grey zone.  I go back and forth, up and down, trying to lead the correct way.  It’s tiring.  But understanding the concept of power distance has allowed me to see problems and solutions in a whole new light- and helped me do what’s right for the company at this time.

To see more information on cultural differences like time views, high/low context and individualism/collectivism, check out my Slideshare.

How does power distance impact you the most?  Whether in school, home, work, overseas or at home, I want to know your story.  Share your experience on Twitter- @motazhajaj