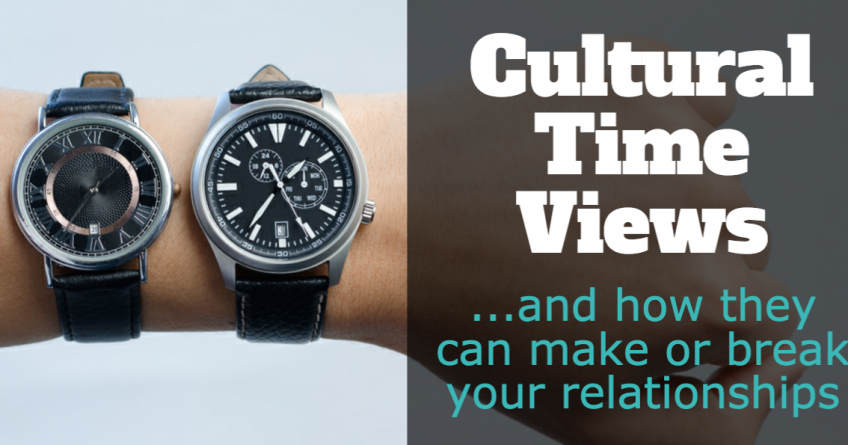 How would you react to the following scenario?

You just got a Whatsapp message from your buddy who says he’ll pick you up in 5 minutes to get dinner.  Five minutes pass.  Ten minutes.  Fifteen, thirty and finally over an hour goes by and he hasn’t arrived.  What’s going through your head right now?

“WTF? I guess the friendship isn’t a priority to him.”

Chances are, if you’re from the US or other countries who hold a Monochronic view of time, you’re thinking the first two.

If you’re from the Middle East, you’re probably thinking the latter due to your culture’s Polychronic view of time.

One of the biggest differences in cultures may be how the people of the culture view and manage their time.  The US and Northern Europe have strong monochronic tendencies.  Time is viewed as linear with one thing happening at a time.  A schedule is taken very seriously and interruptions are usually not welcome

The Middle East, Latin America and some African countries tend to be more polychronic.  Relationships take priority while meeting times are suggestions.  Interruptions are welcome because business life and social life are intermingled.

No curve for you

As a college student in the US, I had lots of experiences that showed me how different polychronic and monochronic time views are.

I was a great student in my ESL class for the teacher, Ms. Stewart.  Class started at 1pm sharp and after 5 minutes, it was her rule to lock the door.  After coming in late one day, I was sure she wouldn’t stick to her rule, especially since I was a good student.  The door was locked.  I knocked.  I kept knocking.  She finally opened the door- just enough to let me know I would be counted absent.  This was just the first experience of many that would help re-shape my time management habits.

A computer science professor, who also happened to be my advisor, taught me one such life lesson.  I had made an appointment with him at 9am to fill out some government paperwork needed for a scholarship.  Following the social norms of my home country, I showed up at 9:30, not thinking a thing about it.  He was available, but wouldn’t meet with me, telling me to come back tomorrow.  I replied that I would be back sometime during his office hours.  He put his foot down for this too.  He told me to come tomorrow at 9- which I did.

Another professor taught me the same lesson, but with harsher results.  At the end of the semester, despite my consistent studying, I had a 68% in the class.  In order to receive a C and not have to retake the class, I would have to convince him that I knew the material so he would curve my grade.  After approaching him with my plea, he denied me for one reason only- I always came in late to class.  He said, “I could tell that you really care if you came in on time, but you don’t.”  Now, to me, showing up on time has nothing to do with my dedication to a subject, but to this American professor, it was how he separated the committed students from the apathetic.  And it meant I had to take the whole class again next semester.

Most Americans will easily forgive a couple minutes of tardiness.  But when dealing with professors and managers on a professional level, you must show up on time on a regular basis in order to not be looked down upon.  I spend the first two years in the US adjusting to this monochronic view of time.

Of course, when I moved back to KSA I had to readjust myself not to expect meetings to start at a scheduled time.

If you happen to work or socialize with anyone from a country that has an opposing time view as you, what’s the answer?  The first step is definitely understanding the differences and adjusting your expectations.

How have you adjusted your time expectations when working inter culturally?  Let me know on Twitter @motazhajaj or in the comments below.  I’d love to hear your experiences!